A downloadable game for Windows

This is an early prototype of a VR dungeon crawler. Each dungeon run is generated along with the loot and secret crypts, pits and traps.

The game centers around a dungeon lair that you collect your loot, weapons and items in. You take only what your willing to lose with you into the dungeon. Each time you enter the dungeon, the only way to exit is to find the portal back to your lair.

If you drop a weapon or item and exit the dungeon without it, its gone. You have a finite amount of inventory slots (gold, gems and other consumables don't count take inventory space)

Purchase or find abilities that enhance and change how your weapons function and interact. abilities can be combined onto the same weapon, transferred from one weapon to another, added and removed.

current state of this game is that its a (barely) working prototype with bugs and missing features.  Ultimate goal is to turn it into a fully fledged roguelite with substantially more depth, upgrades, and progression.

I've a long list of recommendations for the game. It seems you have stopped development on the game a long time ago, but you never know.

> When the AI is hit with arrows it just takes damage & doesn't react in any way. I think the ideal behavior would be to close-in on the source of the damage, the player.

> The game freezes for sometime when things are destroyed. This doesn't always happen, but happens most of the time with destroyable floors & walls(I guess big objects in general). And I destroy a lot of floors because I use the bow & shoot a lot. Maybe you are not baking the destruction & doing real-time destruction calculations? This maybe because I have a bad CPU.

>  Whenever something covers my head, for example a destroyed wall piece, I see red. I think this is supposed to be the you are putting your head into virtual objects thing that VRIF has. But please change it to grey or black. Red makes players assume they're taking damage. I thought I was taking damage in the beginning but later realized this was a VRIF, with the color changed to red.

> The bow's aim is 1 handed & this is really annoying. Most popular Archery games do 2 handed aim. It's way easier to aim two handed because you use both hands for aiming in real-life. VRIF bow has a thing you can change in the Inspector to make the bow 2 handed. BNG added 2 handed aim suport for the 1 handed aim bow after a feature-request.

> Use the lighting better. Maybe make the dungeon a bit darker & makes the oil lights a bit brighter with yellow(yellowish-orange fire color) to give the feel of the dungeon. Currently because of unrealistic lighting there is no feeling of realism. It feels like I'm looking at bad plastic toys. Lighting is the most important visual thing when it comes  to Low-Poly games. Then, have these new lights baked.

> Force-grabbing things is really hard & so so annoying. I have to fiddle with my hand to point at the thing & it takes forever with moving the hand a lot for it to realize I want to pick it up. I didn't realize VRIF was this bad at picking things up. Maybe you reduced the radius or area that VRIF hand detects objects to be force grabbed.

> When I'm standing on coins or gems & I try to pick it up with force grab, I fly. This is most likely a bug with VRIF. Don't know if it has been fixed.

> VRIF treats the Oculus grip the same as Vive grip. Oculus grip is very easy to press while Vive grip is hard to keep pressed. You'd want weapons to be grip press trigger hold for Vive & grip hold hold for Oculus Touch. You'd have to modify the code of the Grabbable script to have different inputs for Vive from all other controllers. I think Vive is the only odd one out, so you'd want to detect Vive controllers with custom code tell the grabble that it is to use the Vive input(which you also have to modify the code for to set up different input controls for Vive). Holding the trigger on both the Vive and Oculus for holding objects is feeling wierd. For weapons at least, on Oculus Touch it should be hold grip to hold & release Grip to release, while for Vive press grip once to trigger hold & release.

Hi! I tested your game in my video (it's the first game):

It was fun, even in such an early state! It really has potential ^^ But as you will see in the test, I had a huge bug, and I honestly hesitated to Alt+F4 because I could not escape from it ^^" (adding a little tutorial could be good btw ♥)

Anyway good job, I hope I could see more soon! :)

nice, but a little bit buggy

Thanks for checking it out! Really cool to see it played on a Quest (I've only run it thus far on Vive). It's still super early, so yea tons of bugs to work out yet. 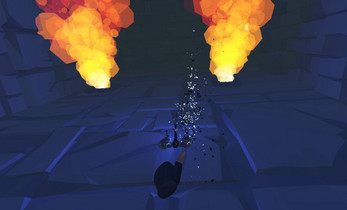